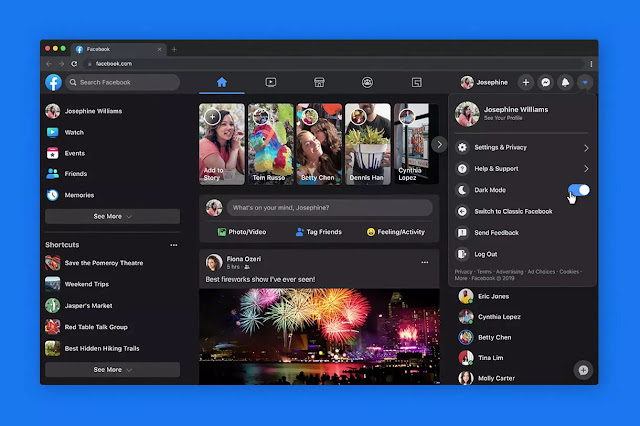 Facebook’s redesigned desktop site is now available globally, the company announced on Friday. Prior to this change, the new version of Facebook was available only if you opted into it starting in March and only in some markets, although the company said at the time that a majority of people would get access that month.In a blog post published today, Facebook says the new site will “now be the web experience for Facebook globally,” adding that “it’s faster, easier to use and gives your eyes a break with dark mode.”
Dark mode is indeed the standout of the new version, but the update also delivers another pretty dramatic overhaul. The home layout features a new skinnier News Feed, ample empty space on the left and right rails, and larger icons and a menu bar that lets you easily jump to various parts of the app.

For those who want to turn on the new design and enable dark mode immediately, here’s how:

The goal when Facebook first unveiled the desktop redesign at its F8 developer conference in 2019 was to refocus the core web experience around the areas most people still enjoy using: events, groups, and messaging. It wasn’t quite the end of the News Feed per se, but more Facebook leadership admitted that it’s now an antiquated concept to have an algorithmic feed filled mostly with junk from pages and public posts.

People are retreating more and more into private groups and messaging, and Facebook’s only core utility right now is that it’s still the best way to organize a large event with friends or reach out to someone you know whose contact info you don’t have.

CEO Mark Zuckerberg said as much when, a few months prior to the redesign reveal, he announced a shift for his entire company toward privacy-focused products and features. And unless you’re in Facebook’s older demographic or you’re particularly into the site’s unique brand of hyper-partisan political content, most people have moved on to spending more of their time on Instagram, TikTok, Twitch, YouTube, and other platforms.

The new Facebook reflects the company’s priorities, with a focus on videos for the News Feed (because video ads still earn the company a lot of money) and easy access to events and groups alongside a redesigned Messenger panel. It can be a jarring visual change, but it is a much more pleasant Facebook to use once you know your way around the new interface.